This is not a pine tree

Continuing our spotlight on some of Lewisham's hidden mulberries

Our Morus Londinium database now has around 500 mulberry tree entries, about half of which have been verified so far. But very, very few are street trees. Most mulberries in London (and the U.K. as a whole) are in private gardens, parks, churches, schools or the grounds of stately homes. And the overwhelming majority are black mulberries (Morus nigra). This is partly for historical reasons (James I, etc.) and partly because the black mulberry doesn’t make a good street tree, dropping indelible purple fruit and juice on the pavement (and passers-by) in July and August.

This is in striking contrast to the picture in southern France and Spain, for example, where mulberries are common street trees in villages and towns. Here, though, they are invariably white mulberries (Morus alba), a legacy of a silk industry that thrived from the 16th century right up to the late 19th century, providing the stock for a plentiful supply of saplings in today’s nurseries, too. On my summer holiday this year in El Masnou, just north of Barcelona, white mulberries were so common as street trees that I stopped taking much notice of them after a few days, whereas they are very rare in the U.K. 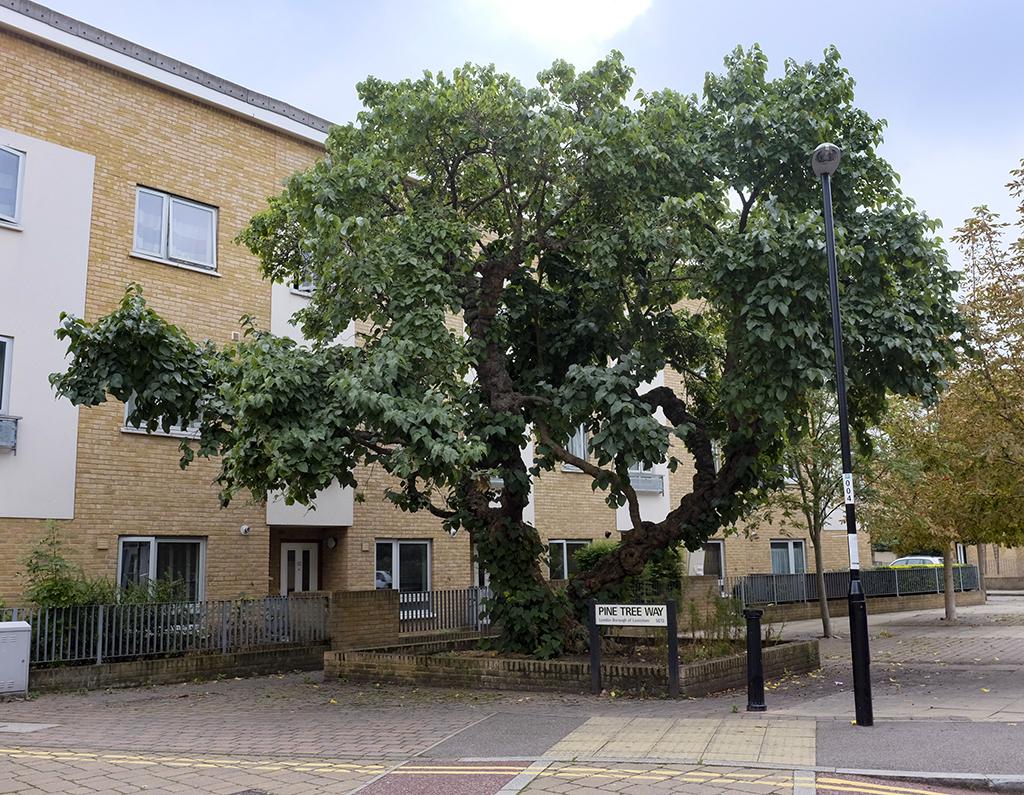 Black mulberry on the corner of Pine Tree Way and Elmira Street in Lewisham.

So, the fine, black mulberry on Elmira Street in Lewisham, is doubly special. Not only is it a fabulous, healthy tree, bearing loads of fruit in summer, it is also categorically a street tree. But has it always been? Now nestled in the shade of a modern housing block, on the corner of the inaptly named Pine Tree Way -- why on Earth wasn’t it called Mulberry Tree Way? -- I was curious to know when it might have been planted and how the site has changed over its lifetime.

At first, not being a Lewisham resident (albeit a researcher at Goldsmiths in New Cross, up the road), I thought this tree might have been on the site of Lewisham Silk Mills – not that silk mills need to cultivate silkworms and mulberries on site, they just weave the thread, which can even be imported. But I soon realised that the Mills had been further north, along the Ravensbourne river, on what is now (aptly named this time) the SilkWorks housing development on Conington Road, opposite Silk Mills Passage. But I’ll be writing about this in another blog. 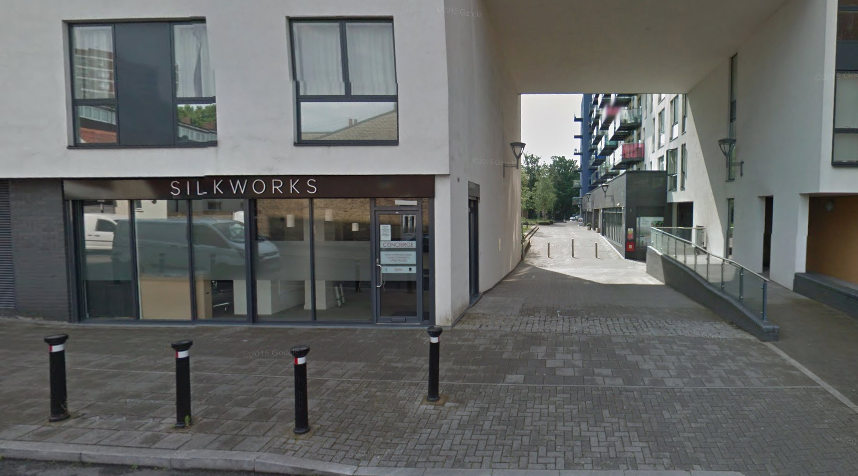 New development where the Lewisham Silk Mills once stood.

Pine Tree Way is a new road in the River Mill Park housing development, which opened in 2007, replacing the Sundermead Estate, which had already become decrepit, barely 40 years after it first received planning permission, in 1963. Sundermead was demolished ten years ago to allow the redevelopment of the Loampit Vale area (marked on a 1745 map as Loampit Hole and known for its rich loam soil).

As the Elmira Street / Pine Tree Way mulberry is obviously more than 50 years old, we know that at least two generations of children have grown up around it since the 1960s. And, talking of children, in April 2009 the tree witnessed a celebrated occupation by local parents of the Grade II listed Victorian Lewisham Bridge School just over the road, scheduled to be demolished to make way for a new one. In the end, the local residents wOn and all but the nursery building of the old school was incorporated into new designs for what was to become today’s Prendergast Vale College.

But the mulberry tree predates the Sundermead estate, too and appears, from an 1893-95 Ordnance Survey map, to be on the site of what used to be a boys’ school, built in the second half of the 19th century, probably in the 1860s. The change of land use over the past century can be seen easily on this map, made available by the National Library of Scotland, by moving a slider to bring past and present layouts to the fore.

In Victorian times, girls and infants were taught separately across the road, in the old building of what is now Prendergast Vale School. As can been seen from the 1893 map, though, the lower end of Elmira Street used to follow a different course, further north, to today’s. And at the time there was a block of 1860s housing running along on Porson Street, to the west, and Shrubbery Road, which ran north-south under the site of today’s new school buildings.

The Victorian street layout is still there on an Ordnance Survey map of 1949-50, but the boys’ school appears to have been demolished, with areas around where Pine Street is today marked as ‘ruin’, possibly referring to wartime bomb damage. Shrubbery Street had already been renamed Sundermead Street around 1938. And, according to one source, this open space was used as garages when the Sundermead estate was built. 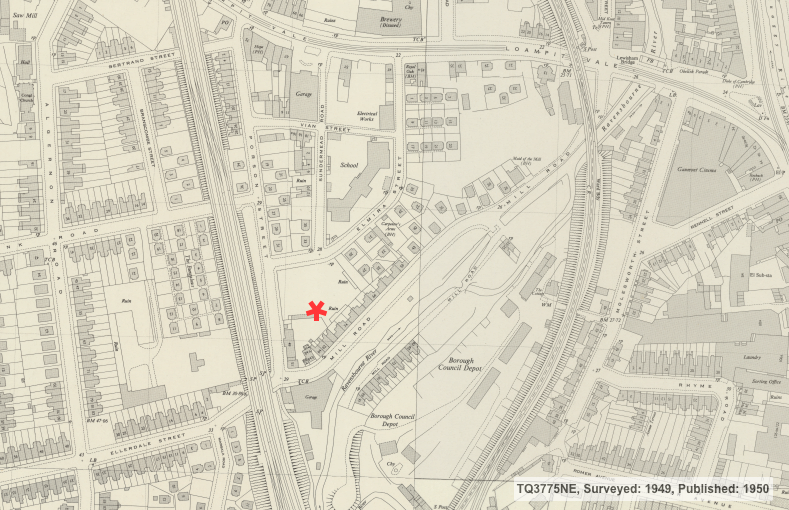 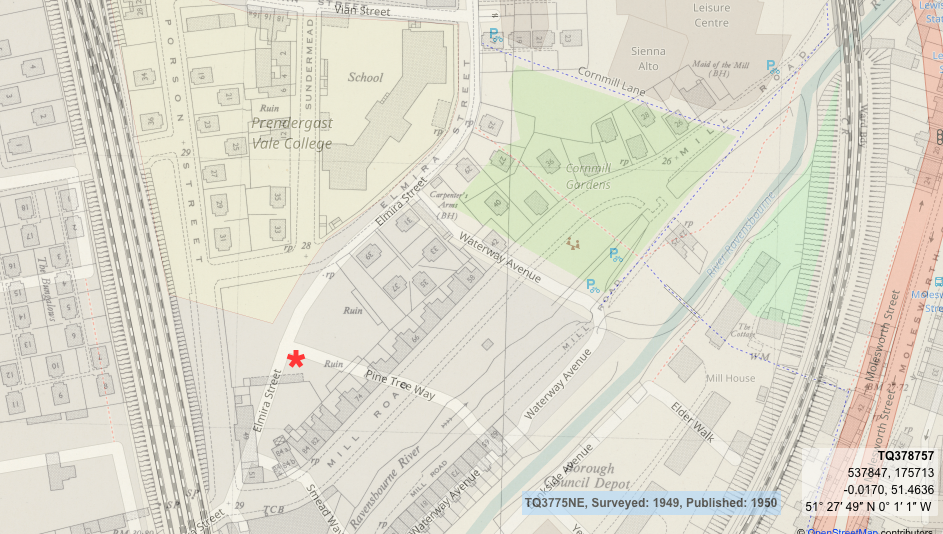 Left: The area around Elmira Street in the 1950s. The red star marks the approximate location of the mulberry tree. The boys’ school has now gone and Shrubbery Road has been renames Sundermead Road. Elmira Street still follows the course of the Victorian street plan.

Right: The 1950s street plan, overlain with today’s plan. The red star marks the site of the mulberry.

Mulberries are often associated with schools – there are several in the Morus Londinium database, such as Camden School for Girls, Bousfield Primary in Chelsea, or Morpeth School in Bethnal Green (now felled). So, it is quite likely that the tree had been planted in the playground of the Victorian boys’ school, as shown on the first map, above, making it about 150 years old.

Could the tree be any older than this? Further research on old maps shows that there was a flourmill, or corn mill, on the site now occupied by the River Mill estate (and its Cornmill gardens). Domesday book apparently lists 11 mills on the Ravensbourne River, with one, a corn mill, corresponding to the site now occupied by the River Mill Park development. The mill was in continuous operation until it closed in 1920, having been rebuilt in the 1870s (around the time of the housing development) and converted to run on steam in 1920, then electricity. On an 1893 map it is shown as Lewisham Bridge Mill, directly by a weir on the river. It was finally demolished in 1934. The weir and some of the waterways were drained and filled when the land was converted for housing. 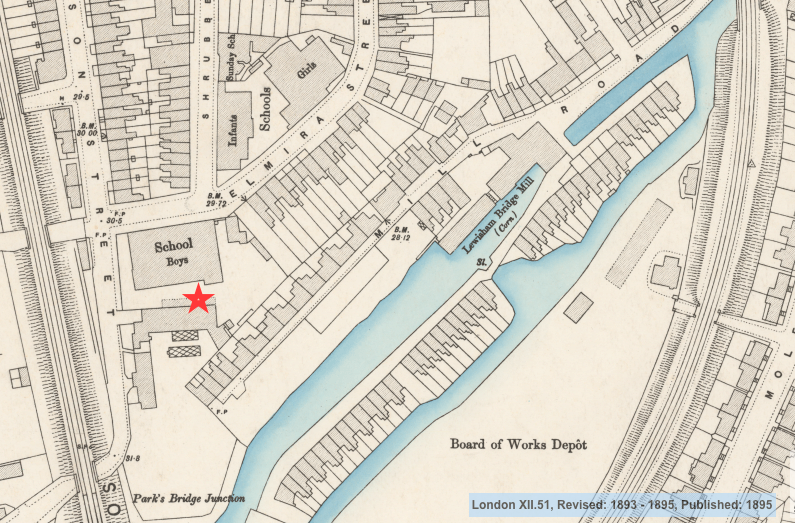 Left: 1893-95 OS Map showing the Lewisham Bridge Mill still in operation, alongside the mid-Victorian housing development. The location of the mulberry is marked with a star.

Right: 1862 Edward Stanford map, before the S.E.R. Ladywell loop railway line had been built, showing the approximate location of the mulberry tree today.

So, although the land would have been available to plant a mulberry before the Victorian boys’ school was built in the 1860s, why would anyone have done that? The name ‘Shrubbery Street’ could indicate that there were once bushes there. But mulberries are usually deliberately planted, for ornament, fruit or, indeed as part of a silk industry. In this case, though, it makes sense to assume that the tree would have been planted in a school playground, as has been done in many other schools (“Here we go round the mulberry bush”, and all that…).

Article and pictures by Peter Coles

Another old mulberry threatened by the developer’s axe 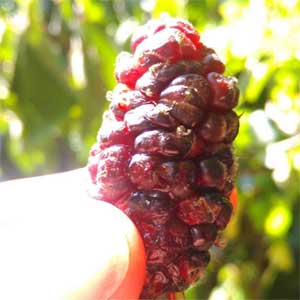 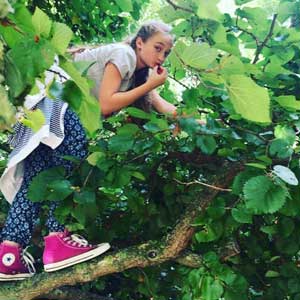 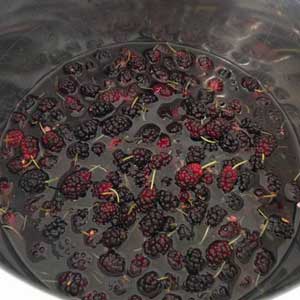 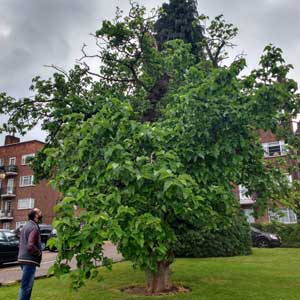 The timeline of London's mulberries

How is silk made?

Learn the signs to spot a mulberry