As part of Morus Londinium

This walk will take you from Charlton House to the green surroundings of Greenwich Park, the university, and if you are feeling energetic, onwards to Deptford. You'll see mulberries young and old, and if you're following this in July or August, you'll have the chance to taste white and black berries too.

Scroll down to continue ▼

Before we start, you'll need to know how to spot a mulberry. They come in all shapes and sizes, but are often identified by spreading branches, large, heart-shaped leaves, a gnarly trunk, and (in summer!) fruit that looks like a long blackberry.

Pictures and text by Peter Coles. The map was created by The Conservation Foundation as part of the Morus Londinium project, supported by the Heritage Lottery Fund. Some pictures sourced from Wikimedia. 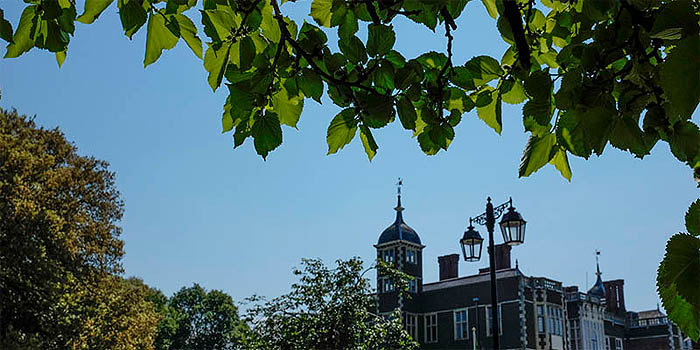 One of the oldest trees in London, the Charlton House mulberry is thought to be as old as the Jacobean house itself, built for Sir Adam Newton, between 1607-12. Sir Adam was tutor to Henry, Prince of Wales, eldest son of King James I. Despite popular belief, this was not the first mulberry to be grown in Britain. There is good evidence they were brought over by the Romans in the 1st-4th centuries AD and were grown in medieval monastery gardens.

It is not clear if this tree was planted as part of King James I’s attempts to start a silk industry, following an edict of 1608-9 ordering Lord Lieutenants to plant mulberry trees to feed silkworms. The Charlton tree is a  black mulberry, usually grown for its fruit, and not the best choice to feed silkworms, as the leaves are coarse and hairy underneath. Silkworms prefer white mulberry leaves.

There is a fine old black mulberry near to the path, on the northern edge of the cricket pitch, southwest of the Observatory. It’s not obvious why the tree is here or how old it is, though it looks well over 100 years old.

Walk diagonally north-east across the Park, towards Maze Hill station, past the Observatory, crossing the Greenwich meridian. Look out for massive veteran sweet chestnut trees and the fallen, dead trunk of the Queen Elizabeth Oak.

The walled Queen's Orchard was part of Greenwich Park from the 17th century onwards, but was alienated in 1976 when the Greenwich Hospital Estate sold it to Greenwich Council. It remained in their ownership and was managed as a wildlife garden until it was returned to The Royal Parks. It reopened in April 2013 after restoration. There is a sprawling black mulberry on a mound in the centre of the Orchard. It looks as old as the Charlton mulberry, but could be younger.

Walk along the path parallel to the south wall of the orchard, past the boating pond and carry on along the herbaceous border path. Leave the Park when you get to the National Maritime Museum and walk around it to Trafalgar Road (A 206). Cross over to the Dreadnought Building of Greenwich University. 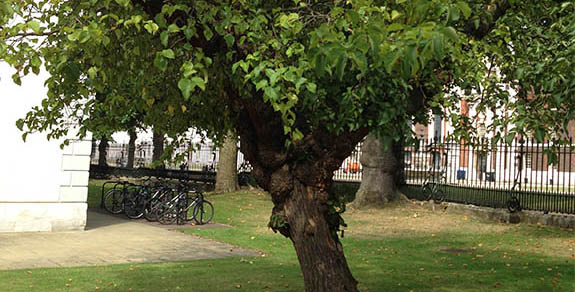 At the southeast corner of the Dreadnought Building is a fine old black mulberry and thirteen white mulberries of different varieties inside the railings along Trafalgar Road and on either side of the entrance to the Dreadnought Building on College Way to the north. These white mulberries were offered by the Worshipful Company of Fruiterers for the Millennium and echo the trees reputedly planted for James I’s silk project.

The leaves of M. alba are finer, more shiny and much less coarse than M. nigra. They usually have three lobes, rather like a fleur-de-lys or a fig tree (they belong to the same family, Moraceaa). However, leaves of the black mulberry growing on suckers and new shoots often have a similar appearance.

To continue, walk past the Cutty Sark and follow the riverside path west. After crossing the footbridge over Deptford Creek, take an immediate left, before a right on to Clarence Road and west to St Nicholas Church.

In the churchyard, on the south side is a dwarf weeping white mulberry (Morus alba pendula). The murdered Elizabethan playwright Christopher Marlowe is buried in the churchyard (there is a plaque on the eastern wall). There is a small carving in the church by Grinling Gibbons, the master wood carver whose work adorns St Paul’s cathedral, Hampton Court and Windsor castle.

Leave by the west gate under the gatepost skull and crossbones and north along Deptford Green, then left onto Benbow St. After the park continue onto Prince St, past the Dog & Bell pub, until you reach the mini roundabout. Here turn right onto Sayes Court St. Enter Sayes Court Park by the wrought iron gates with mulberry leaf and fruit motifs. 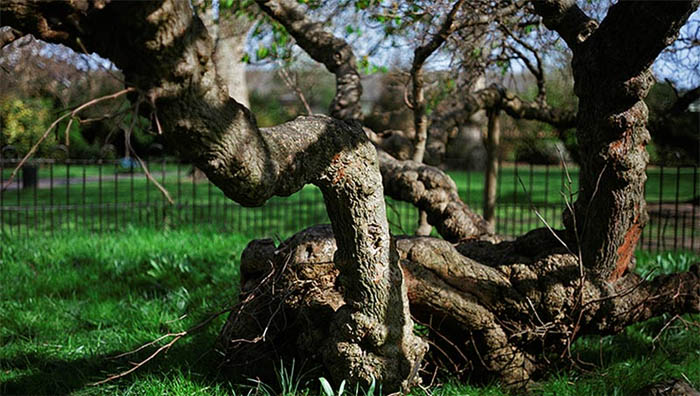 Slightly to the left and straight ahead is a sprawling black mulberry very much like the one at Charlton and the Queen’s Orchard. The park is on the site of the 17th century diarist John Evelyn (1620-1706), author of the definitive book on growing trees, Sylva. Sayes Court was famous for its garden and Evelyn is known to have planted a mulberry tree there, as it is marked on a map he drew. Research on the tree, including DNA analysis and use of historical maps, suggests that the tree may not have been planted by Evelyn, but could be a 2nd or 3rd generation descendant of one he planted. Mulberries do fall over (like this one) and the central bole rots down, while side branches grow into what appear to be new trees, but are part of the original.  The tree is wrongly associated with Peter the Great who rented Sayes Court from Evelyn while studying at the naval college (hence Czar Street). But far from planting trees the young Peter destroyed part of the garden in a drunken party, driven through Evelyn’s prized holly hedge in a wheelbarrow. 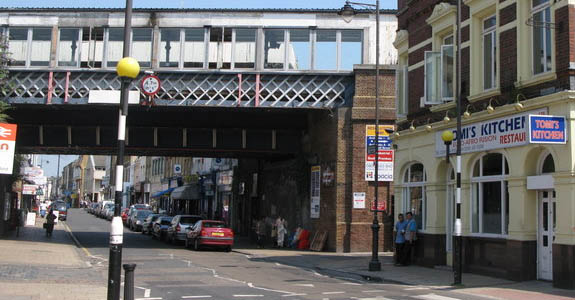 Sadly the mulberry adventure is over. To return home, you can find trains into London Bridge and Cannon Street from Deptford station. To reach the station head out of the park and back to the mini roundabout, turning left onto the main road (Evelyn St/A200). Follow this until you reach the junction and turn right on to Deptford High Steet and the station.